HomeAutosDude rented me a Tesla on Turo. It's clear how its car-sharing...
Autos

Dude rented me a Tesla on Turo. It’s clear how its car-sharing model is different 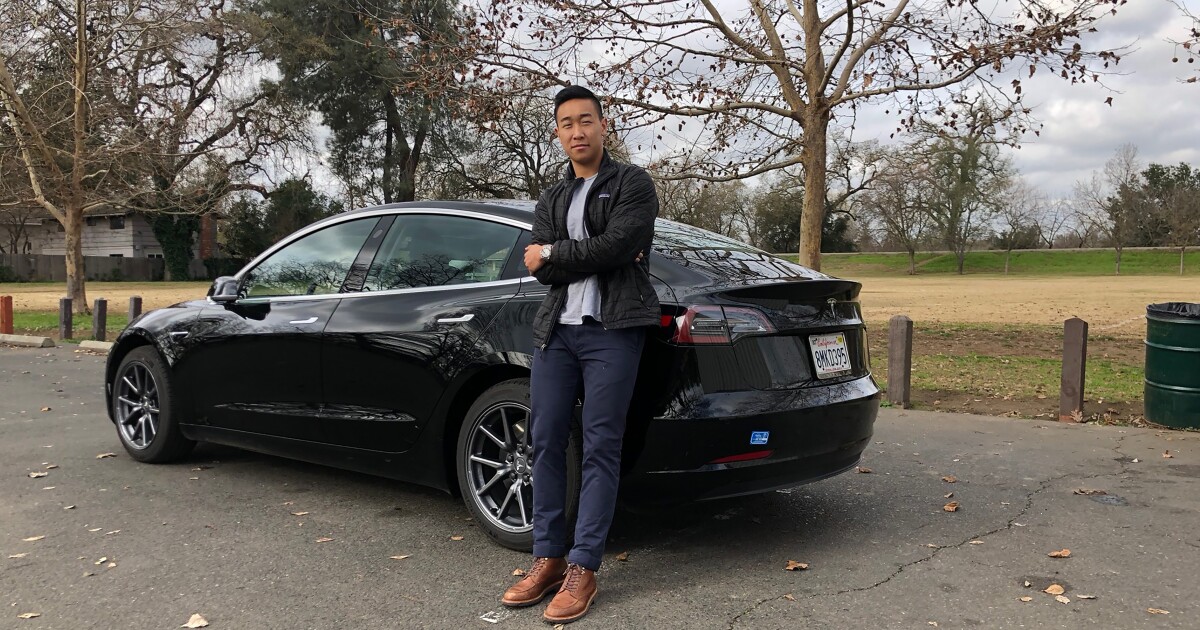 A few blocks down the hill from my Berkeley home lives a guy named Ethan Dang. We’d never met before, but for two days he gave me his $45,000 Tesla Model 3 to drive around.

We met up through a car-rental app called Turo. The San Francisco-based company is colloquially known as the Airbnb of car rentals. It works like this: One individual owns a car. Another wants to rent it. Turo puts them together.

In the inelegant language of Silicon Valley, that’s known as a peer-to-peer platform. Turo is growing fast — it says it’s more than doubled its inventory over the last two years, to about 400,000 vehicles. And so far it appears to be riding out a consolidation in the app-based alternative car-rental business.

Beyond a couple of hitches with account setup, my Turo experience was smooth. After you create an account on Turo, you go to the website or tap on the app. You pull up a map and see the cars available near you, what days they’re available, who the owner is, and how much you’ll pay. With a click, Turo charges your credit card. The app puts you in touch with the owner. The two of you take it from there. Turo also operates valet-service lots in the San Francisco and Los Angeles markets where renters can pick up and drop off cars.

My two days with the Model 3 cost me $316.99, broken down this way: the basic, advertised rate of $110 a day, plus $44 for insurance, $10 for an EV-recharge fee, an $11 cleaning fee (an option I chose in order to avoid possible hassles over smudges on the windows) and a $31.99 “trip fee.” That last one is apparently Turo’s take on the Ticketmaster “convenience” charge, a way to build in profit at the back end while advertising a lower price up front. (Insurance for both owner and renter is handled through Turo by Liberty Mutual.)

Turo competes with a company called Getaround, also based in San Francisco, but Turo is the leader and continues to pull ahead in market share. Its 400,000 listings compares with about 60,000 listings claimed by Getaround.

The major operational difference between Turo and Getaround: The latter uses a hardware device to remotely lock and unlock car doors. That makes pickup and drop-off easier because the owner and renter don’t need to meet. Hardware installation is an added cost and hassle for owners. But the device doubles as a GPS tracker, which also allows a renter to be tracked for misbehavior.

Turo gained share against Getaround in part because there’s no hardware cost and hassle for owners. But that makes it harder to track renters who abuse the cars. (Because Tesla uses over-the-air software, Dang was able to track one of his Model 3 renters hitting 130 miles per hour.)

A Getaround spokeswoman said that Getaround’s hardware makes car sharing more accessible. “Getaround is several years ahead of the closest competition in connected car-sharing technology, and uniquely own our hardware and patents,” she said.

Mike Ramsey, an analyst at Gartner, said Turo got a leg up by building out its inventory faster.

“For car sharing to be useful, it has to be everywhere,” he said. “The [business] model is a tough balance between the cost of fleet management balanced against having a large enough number of cars spread across a region to be useful for consumers.”

The alternative car-rental market is crowded, with business models varying to different degrees from Turo and Getaround’s approach.

Zipcar owns its vehicle fleet and drivers leave its cars about town, like Lime scooters, where renters can use an app for short-term rides such as a 45-minute trip across town.

Care by Volvo offers the automaker’s cars at a monthly rate — not quite a rental, not quite a lease. Automakers call this a subscription model, where subscribers can turn in their cars for new models under varying plans. Audi and others offer similar services.

Sharing has spread beyond cars. Outdoorsy is a service similar to Turo’s but specializing in RVs and campers.

Turo is capitalized with $470 million, giving it an implied value, the company claims, of $1 billion. Only those investors have access to Turo’s core financials. The company won’t reveal revenue or how much money it’s making or losing.

Clearly some Turo competitors are pulling in their horns. Earlier this year, General Motors pulled its Maven service out of Chicago, Boston and six other cities, though it’s still operating “growth potential” areas in nine others, including Los Angeles, according to the company. A BMW-Daimler short-term rental partnership called Share Now exited the North American market earlier this month. Automotive News said competition from Uber, Lyft and electric scooter companies contributed to its demise.

The companies launched their services a decade ago, placing a bet that “peak car” had been reached and new mobility services were necessary to make up for a decline in the auto business. But automobile sales reached record highs over that time, and the services turned out to be money losers.

One advantage Turo and Getaround have is that, while automakers limited app-rental choices to their own models, the upstarts can offer any make or model that owners want to post.

Daimler, Mercedes-Benz’s parent, is a major Turo investor. And some automakers still see marketing opportunities in car sharing. Nissan is partnering with Turo in what it calls the Nissan Experience Test Drive. Turo users in Los Angeles, Salt Lake City and northern New Jersey can rent from Nissan dealer inventories to spend time with a car they might want to buy. If they buy a Nissan, they get $300 back. Porsche provides training and educational sessions through Turo in Los Angeles and San Francisco, where Porsche owners can be trained to become “hosts” for Turo renters. Porsche says the program provides exposure to the brand and a way for Porsche owners to help pay for their pricey cars.

It’s impossible to know how many Turo owners are using the service that way. My Tesla owner, Dang, said, “I’m not doing this to pay off the Model 3.”

Still, he does have a side business going. Dang works full time as an estate liquidator — hired by families to sell the possessions of the recently deceased. But that’s his own business, which gives him the flexibility to rent out three cars on Turo: the Model 3, the Mini and a Jaguar F-Pace SUV. Recently he bought a Ford Transit Connect commercial van; he’s modding it into a camper at his parents’ house in Sacramento and plans to list it on Turo too.

Since September, Dang said, he’s pulled in more than $6,000 by renting out the Mini Cooper and the Model 3 on Turo. (The F-Pace is brand new.) He gets immediate cash flow, and, he said, once the three rental-only cars are sold, he believes he’ll score a profit. How much, he’s not yet sure.

Neither Turo nor Getaround could have taken off without specialized insurance that covers both the renter and the owner. “Insurance is the first question we get from anyone not familiar with the business,” said Andre Haddad, a longtime Ebay executive who became Turo’s chief executive in 2011.

The idea of insuring cars for use in ride hailing and other peer-to-peer operations is a new one for insurance companies. Liberty Mutual, the fifth-largest insurance company in the U.S., is Turo’s exclusive provider. Liberty is big in both personal and commercial vehicle insurance, with the expertise and scale to take a risk on new business lines.

When Turo renters crash their cars, they can contact Turo rather than their own insurance provider. “This is a novel kind of insurance. It didn’t exist before,” Haddad said. “It covers you only when someone’s [using] your car.”

Basic liability insurance for the renter is included, but more coverage is available at a price. You can also decide to use your own insurance policy, if your existing coverage allows it. Including your driver’s license information during sign-up lets Turo and Liberty check your driving history and whether you have a criminal record. (The company says it screens all members, but “this varies from person to person.”)

Owners take a bit of a gamble that their car will be returned clean; if not, the owner can charge $50 for cleaning.

So far, Dang said, nobody’s trashed his cars. He’s basically happy with Turo. “It has some issues,” he said, “but because it’s the largest, it’s the easiest way to find clients.”

His Model 3, by the way, was great fun to drive. I liked the big-screen dashboard; other automakers could pick up some lessons on user interface design from Tesla. The car’s quality has proven uneven and Tesla service can be a nightmare. But with Turo, those potential problems are Dang’s, not mine.

Dell Technologies to spin off its ownership stake in VMWare